It’s all in the cards. 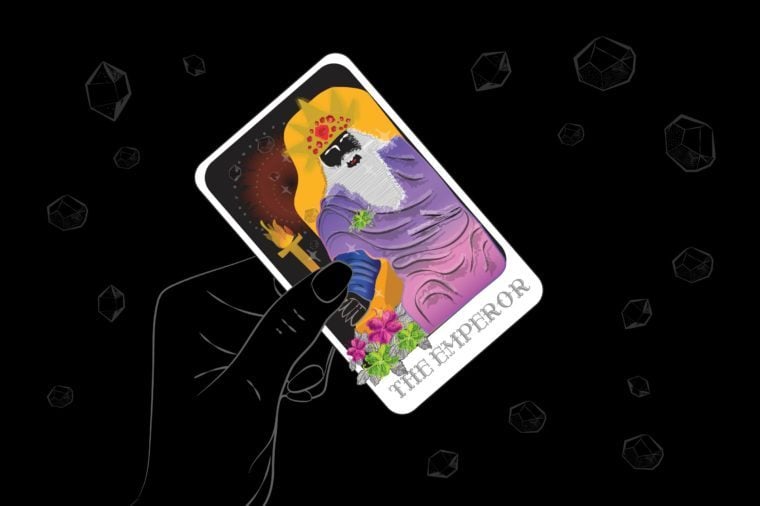 You may know this already, but astrology is actually rather complicated. Most people know only about the 12 signs of the zodiac, but the planets, the stars, and the phases of the moon all influence your horoscope as well. Read up on 7 ways a full moon can mess with your emotions. Another aspect of your horoscope involves tarot card meanings. Each sign of the zodiac has a specific tarot card attached to it that can provide guidance and direction. Tarot cards also come with words of caution— warnings of which each sign needs to be wary. Aries, for example, is related to The Emperor card of the tarot deck.

The Emperor card is a card of authority, according to Davida Rappaport, a psychic, spiritual counselor, speaker, and tarot instructor. “You can embrace the energy of this card (fire) as manifesting your personal take-charge abilities,” she explains. “Go out into the world and create your own destiny.” However, while Aries and The Emperor card both represent strength and leadership, this sign must be advised not to slack off, as that strength can be used for ill as easily as for good. “Be mindful that Aries can start and inspire things,” Rappaport continues, “but always remember to follow through and finish as well.” 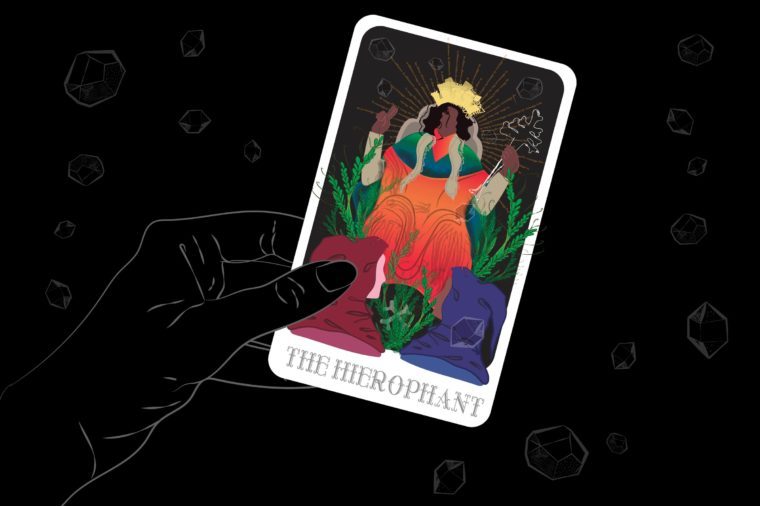 The card associated with Taurus is The Hierophant, also known as The Pope or The High Priest. It is a religious figure, but that doesn’t mean it is always advising Taurus about religion. Rather, it can be about a culture, a faction, or status quo that you are part of. “This card is a reminder that you should assess your belief systems and see if they continue to support you,” Rappaport says.

While you may have been raised in an environment that helped you fit into society (or a specific culture), which is what this card represents, you should see if your beliefs need to change so you can evolve and grow.” If you’ve been led to think one way your entire life, The Hierophant is there to remind you to educate yourself on other perspectives. Don’t get too wrapped up in yourself; be open-minded and well-rounded. 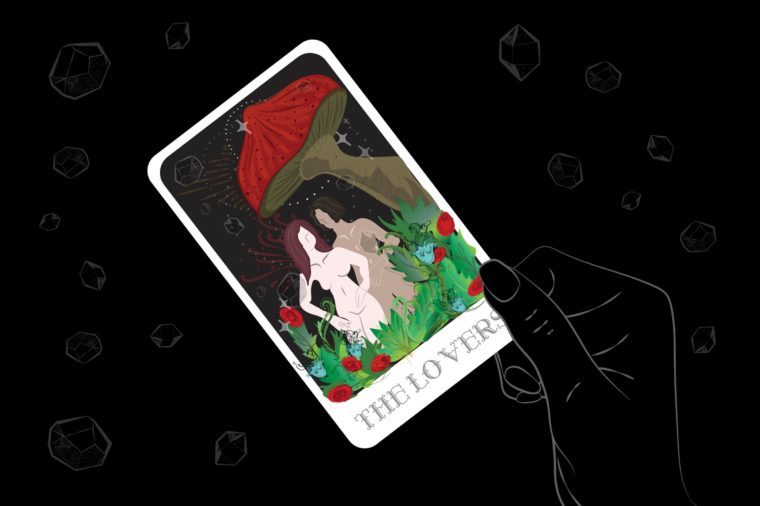 As the dual sign, Gemini’s tarot card is The Lovers. While this can be taken literally as being about romantic relationships, it can also just refer to partnerships in general. “While most people believe that the Lovers is about a new relationship or a soul mate,” Rappaport says, “it can indicate a new relationship, re-establishing an old relationship, or just being open to forming a new partnership—business, romantic, and/or personal.”

But everyone knows that relationships aren’t simple. Gemini especially has to be aware of the trials of new and established bonds. “Be mindful that the key thing for Gemini is communication. While you may be forming or working on relationships, communication will be the key to success.” If a Gemini doesn’t learn to communicate well or learn how to compromise in a relationship, the outcome could be disastrous. Learn about which zodiac signs are most and least compatible. 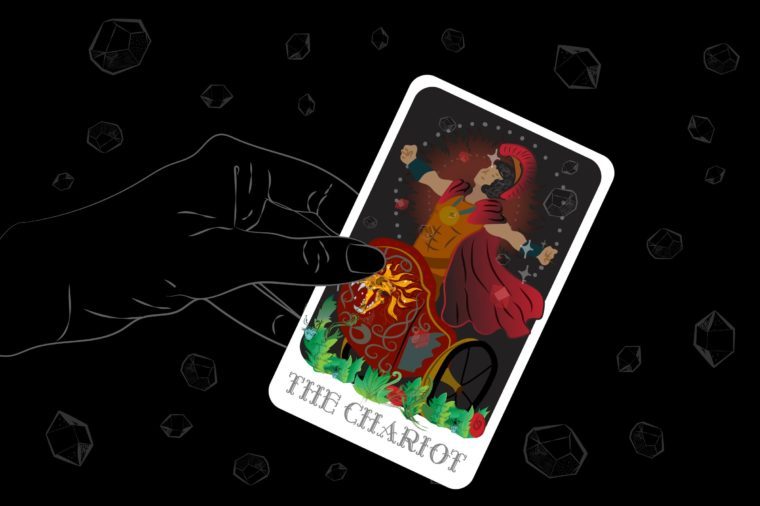 As the sign that is most centered around the home and the family, it might come as a surprise to learn that the tarot card associated with Cancer is The Chariot; the card of freedom. “The Chariot is about venturing out and finding your place in the world,” Rappaport says. Traveling and going on adventures sounds more like a Sagittarius, but this card works well with Cancer because Cancer needs to find that balance between taking care of the home and being free and independent. “If you take your desire for forward movement into consideration, be mindful of home, family, and all that keeps your body and soul together before stepping into the unknown,” Rappaport cautions. “While Cancer represents nurturing and the safety of the home, know that the Chariot is a home on wheels and that without being careless, if you have done your homework, you should be able to move forward safely.” Check out 10 trips that moms and daughters should take together. 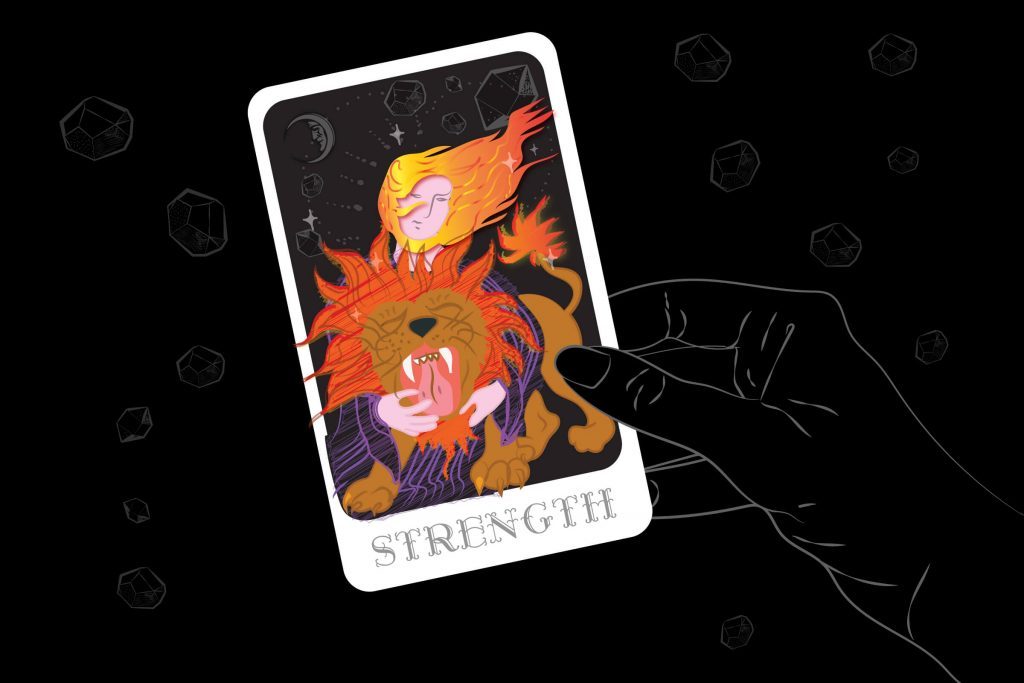 Leo, the sign marked by the lion, is of course connected to the Strength card. Rappaport explains, “While many people associate strength with physical strength, the tarot card “Strength” reminds you that you can tap into your own intuitive, mental, or physical strength when dealing with life situations.” Leo is an outgoing, active sign, but this natural desire for activity and innate strength are about emotional intelligence as well as physical intelligence.

The key to being a successful Leo is to know when and how to rely on mental fortitude. Don’t let life’s obstacles tear you apart and don’t always go running to others for help. “Know that you are never abandoned and that you can always find the strength within you. And if you have faith and a solid belief system, this will also assist you.” 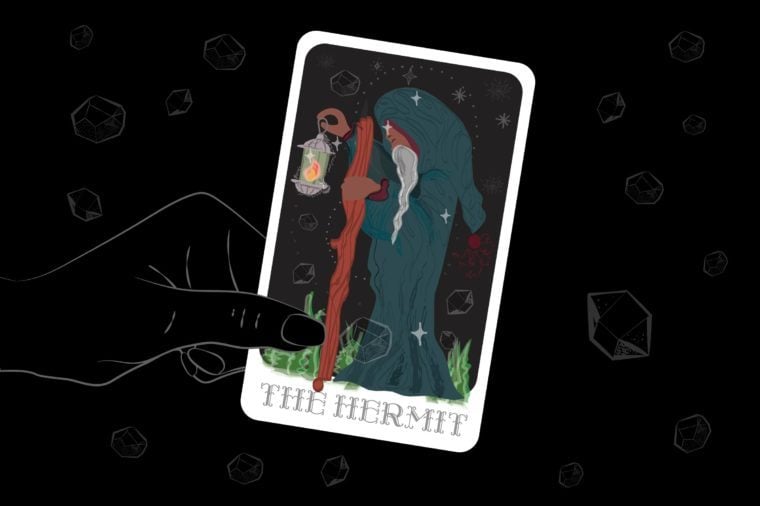 Virgos are very smart, analytical, and responsible people. However, like anyone else, they can sometimes be tempted to make quick and even rash decisions. The Hermit card is here to remind the Virgo to do what they do best—reflect. “The Hermit card is the card of introspection,” Rappaport says. “To tie it into Virgo connects it to the solitary nature of “the virgin.” With Virgo, you have an earth sign that is grounded in wisdom.

Thus, The Hermit is a reminder that with solitude you can be able to access your inner wisdom without noisy clutter. To get The Hermit in a reading indicates that you should process any information both logically and intuitively and before making any important life-altering decisions.” Only you know what is the right course of action for you. Don’t let yourself be persuaded by others. How wise are you? Answer these six questions to find out. 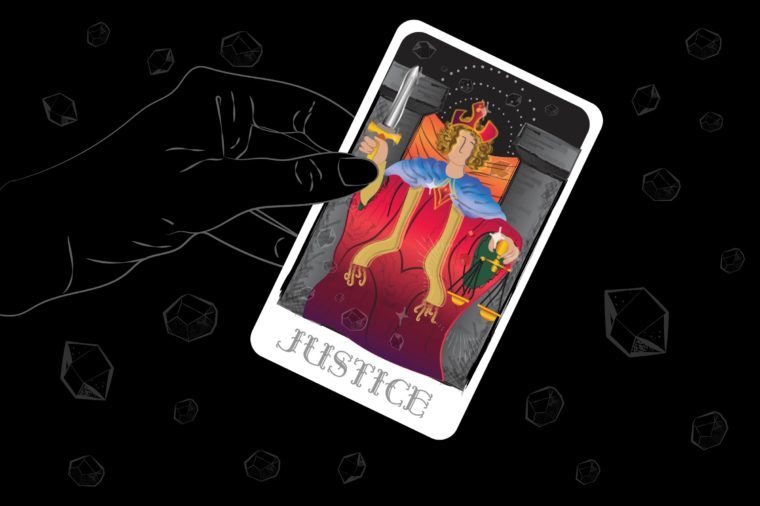 Libras naturally excel at making peace between people, finding balance and harmony, and getting to the root of justice, which is why Justice is their tarot card. “While this is an air card,” Rappaport says, “you have to be mindful that it also ties into doing the right thing, making choices that do not favor one person over another.” If you’re in a situation that calls for you to mediate, make sure that you aren’t harboring any biases one way or the other.

Libras can’t do their job if they have not found balance within themselves. “To receive the Justice card in a reading is motivation to find balance in your life. If you are honest with yourself, you can make a good, informed decision.” If you don’t take the time to find peace within yourself, there is no way that you can bring peace to others. 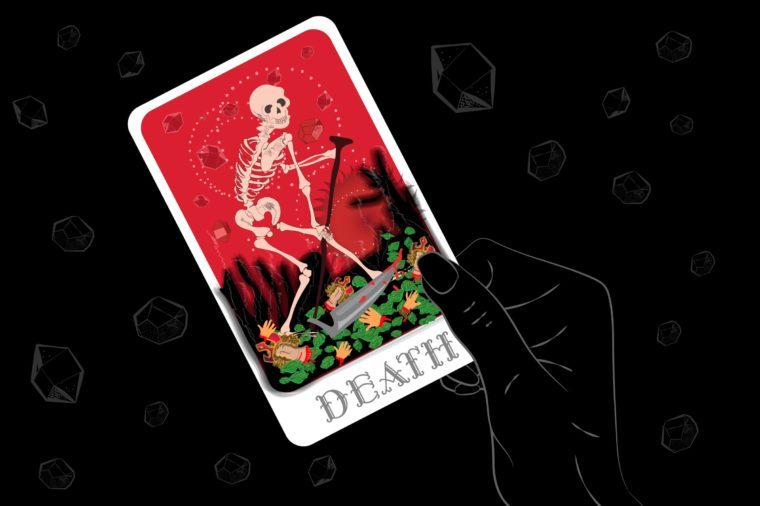 Relax! The Death card isn’t as bad as it sounds. In a tarot card reading, The Death card usually represents something more conceptual, like change. “While the death card does not necessarily indicate a physical death,” Rappaport explains, “it does signal the death of your current way of life in some way. You may need or want to re-invent your career. You may discover that you no longer want to be in a relationship that is unhealthy for you, or you may find that something has forced you into [a] situation that you didn’t see coming.”

Scorpios can lead very turbulent lives, as they are ruled by their passion. However, this same passion—in your relationship, career, or just life in general—can benefit you if you use it in a healthy way. See if you might need a career change. “The Death card ties into Scorpio as it may force you to deal with things that you may have repressed. The beauty of Scorpio energy is that it gives you access to things that are deep and enables you to get to the heart of the matter.” Scorpios can either flourish as a result of their deeper emotional understanding or get lost in the darkness. Be careful about which way you go. 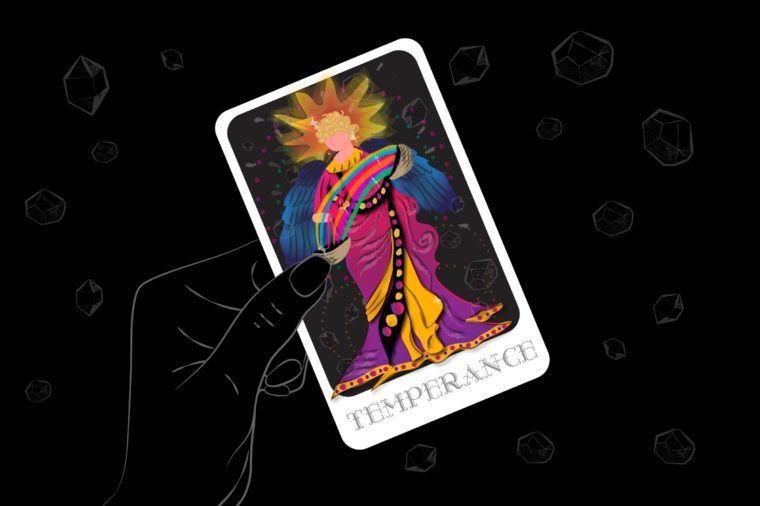 Sagittarius is the most spontaneous sign. Spontaneity has its positives, but it can also bring unforeseen and unwanted consequences. Rappaport cautions, “The Temperance card ties into Sagittarius as a constant reminder that while you may want to forge ahead, you have to slow down and wait. It is a card of mastering the art of patience. While you might not want to wait for something, it might be in your best interests to just find the balance point that you need.” Impulsiveness, while fun, can get you into trouble. For a Sagittarius, slowing down and analyzing the situation might sound like a total fun-killer, but just a little bit of thought before taking off in a particular direction will help this sign greatly. “Another aspect of Temperance is minding your mouth,” she asserts. “While you might want to say something, find the right words [first]. Try not to open your mouth and insert your foot.” This is how practicing patience improves your health.

Capricorns can easily fall into ruts or find themselves feeling stuck in their lives. Because Capricorns are very practical, they tend to sacrifice their passions and desires for stability or “what makes sense.” “An example of this is working at a job you don’t like because it may afford you a great lifestyle,” Rappaport says. “While you may have the funds and the type of life you want, your health may suffer. So, the Devil card in a reading reminds you that you still have a “get out of jail card” and the ability to rise above all things that hold you back.” The Devil card is the ultimate reminder to do what you want in life. While you shouldn’t be reckless about it (not like you would, because you’re a Capricorn), you should always be sure to insert some fun and excitement into your life. If you don’t, you could end up regretting it and being unhappy in the long run.

Find Out About Your Health Outlook For 2020, Based Zodiac Sign

Find Out Your Financial Outlook For 2020, Based Zodiac Sign

Find Out These 12 Fragrances You Should Be Wearing, Based Zodiac Sign